This is a post by Abby Heugel and Francesca Nicasio.

Shopping is something that everyone does in one form or another, but not everyone shops in the same way. While a lot of the attention goes towards Millennials — people born between 1981 and 1996 — retailers shouldn’t underestimate the buying power of Baby Boomers.

Who are the Baby Boomers?

Baby Boomers are now between the ages of 52 and 71, and there are an estimated 75.4 million of them in the U.S. alone. Boomers are healthier than ever, and thanks to medical advances, they aren’t slowing down any time soon. Spending by people 50 years and older is expected to increase by 58 percent to $4.74 trillion over the next 20 years, while spending by Americans aged 25-49 will grow by only 24 percent.

It’s safe to say they wield a lot of spending power, and they’re a shopping segment that retailers shouldn’t ignore. Yet less than five percent of advertising is geared towards them. That means retailers have the opportunity to cash in on the fact that those shoppers are out there — and they’re looking to spend. All it takes is focusing in on how to best reach this audience, and it’s easier than you might think.

Know how they spend their time

The latter is often still in the workforce and might still have kids at home, which means they tend to spend their money on groceries, household furnishings, personal care, and limited entertainment. They could be pinching their pennies a little bit more than the former, which are retired and often have more expendable income. In fact, 70 percent of the disposable income in the U.S. is controlled by Baby Boomers, and they’re set to inherit $15 trillion in the next 20 years.

Marketing towards the leading Boomers should center on hobbies, lifetime-moment purchases such as artwork, special jewelry, and even 30th, 40th, and 50th anniversary gifts. They also spend a lot of time — and money — on their pets, so catering to their animal instinct can be a profitable niche.

Here’s a good example of brand effectively targeting leading Boomers. Toyota’s 2011 Venza “Keep on Rolling” commercial featured a Baby Boomer couple on a biking trip with their friends. Meanwhile, their adult daughter is back home worrying about how her parents are not being active enough on Facebook.

The AARP described the ad’s Boomer appeal perfectly. As they wrote on their blog:

The connotation of “keeping on rolling” through a new stage of life paired with the active lifestyle depicted in the commercial matches well with Boomer’s perspective that their age enables a more rich and full life. The commercial also lightly pokes fun at the Millennial generation’s more technology-enabled relationships by highlighting the liveliness of in-person relationships compared to their kid’s alone time in front of her laptop.

When Baby Boomers set out to make a purchase, around 84 percent of them report that they prefer to shop in-store, and 67 percent report that if an item they want is available online or in a nearby store, they prefer to purchase it at their local retailer rather than order online. This is directly tied to satisfactory customer service.

When LoyaltyOne asked survey respondents whether they were “very or somewhat unlikely”to shop at a current retailer again following specific circumstances, the results were very telling. If they felt the sales associates did not appreciate their business, 54 percent of Boomers were “very or somewhat unlikely” to return; only 33 percent of Millennials answered that way.

While the younger generation might be in a rush, Boomers are often retired and have more time to spend in the store. They’re comfortable interacting with people to get the information they need, so having a knowledgeable sales staff on the floor that can offer advice, guidance, and the time to make a personal connection is especially appealing to this generation.

It can be as simple as asking their name — or remembering their name the next time that they come in — that can guarantee you have a customer for life, and they won’t mind paying more if you meet or exceed their high expectations.

There are a lot of jokes out there about how senior citizens are clumsy with technology, and while they might not be posting selfies and pictures of their smoothie bowls, they’re smarter than people think.

T-Mobile recognizes this. Last year, the company’s CEO, John Legere ‏called out the condescending treatment that other carriers extend to Baby Boomers and beyond. “This generation deserves a little respect! I mean, they invented the whole damn wireless industry to begin with!”

Check out his rant below:

Legere’s rant on Twitter may be part of a marketing campaign, but that doesn’t make what he said less true. About 82 percent of Boomers belong to at least one social media site, with Facebook being their most popular site of choice — and where you should focus your marketing efforts when trying to reach this group. Unlike the younger generation that favors Instagram and Twitter, those continuous streams of information are less popular with Boomer shoppers.

But they do spend 27 hours per week online, and on average, people ages 50 and older spend $7 billion per year online. More than half of Boomers who use social networking sites visit a company website or continue their research on a search engine as a result of seeing something on social media. This means having a strong online presence is necessary to encourage their in-store shopping.

Tha AARP, a brand that obviously understands Boomers well, posts on Facebook several times a day, and highlights issues that their cares about. Keep it simple, but memorable

Baby Boomers have been around the block a few times, and setting an immersive experience, and environment are all very important to them. If the store was too messy or disorganized, 50 percent of Boomers said they were unlikely to shop there again, and if making a return was too much hassle, 54 percent said would be unlikely to return.

While they’re healthier and more active than generations before them, their eyesight is often not what it used to be. As a retailer, stay mindful of the size and color of fonts used in marketing. They also like things simple, so using trendy acronyms like “24/7” or “YOLO” will most likely be lost on them.

When it comes to your online presence, make sure your website is neat and uncluttered with high-quality content that will keep them coming back for more. If you’re an e-commerce site, make sure you clearly state your return policy and offer a one-page checkout, as too many steps could potentially annoy and turn off your older customers.

While younger generations might shop as a hobby, only 27 percent of Baby Boomers agreed with the statement: “I think shopping is a great way to relax.” This means retailers should reward them for their efforts and show that you appreciate them, and an easy-to-understand loyalty program — both online and in-store — is one way to win their business.

When it comes to Boomers, around 26 percent are active in all of the programs in which they are members, as opposed to only 19 percent of Millennials. They also place a high value on program simplicity, with 78 percent saying they will continue to participate in a program because it’s easy to understand.

Here’s a tip: if your business is primarily targeting Boomers, opt for a straightforward loyalty program that doesn’t involve tiers or various hoops to jump through.

Christmas Elves, a retailer that sells holiday-themed merchandise, for example, runs a loyalty program that lets customers earn dollars for their purchases.

“You just get loyalty dollars for the purchases you make. I don’t want to give you points, I don’t want to confuse you,” shares Jason McIntyre, owner of Christmas Elves. According to him, their customers (which aren’t mainly Boomers) love the simplicity of the program. “When we ring up a sale and the customer is in our system, we say ‘Oh okay, you have $23 in loyalty. Do you want to use it now or later?’ That information obviously makes our customers feel good. Most of them of them use it straightaway, while some like to collect loyalty for bigger purchases. But the fact that it’s so easy with Vend is such a blessing.”

Another thing that Boomers understand is email, with 96 percent of the Boomer population using email regularly, and 92 percent known to click-through and explore the products being advertised. This makes it a great way to leverage your brand and push your loyalty program; just be sure to have a clear message and call to action.

More than any other generation, Baby Boomers like to feel exclusive and show off what they’ve earned. By giving so them an opportunity to earn your loyalty points, you — in turn — earn their loyal and repeat business.

So while it’s important to address the full spectrum of customer needs no matter which generation they come from, make sure you remember the Boomers — and make sure they remember you.

And while all these tips are geared towards an aging generation, not enough can be said about providing exceptional customer service to all your guests — no matter what age they may be.

If you enjoyed this post, be sure to check out Vend’s guide to increasing sales. This handy resource offers 10 proven tactics for boosting retail sales and improving your bottom line.

How do you engage Baby Boomers in your store? Let us know by tweeting at us or drop us a line on Facebook! 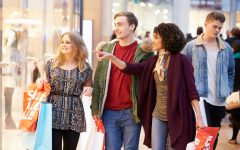 10 Common Types of Customers in Retail (and How to Sell to Them)...

Generation Z Marketing: How to Engage and Sell to Gen Z...

What Retailers Should Know About Selling to Millennials (a Chat with Jasmine Glasheen)...