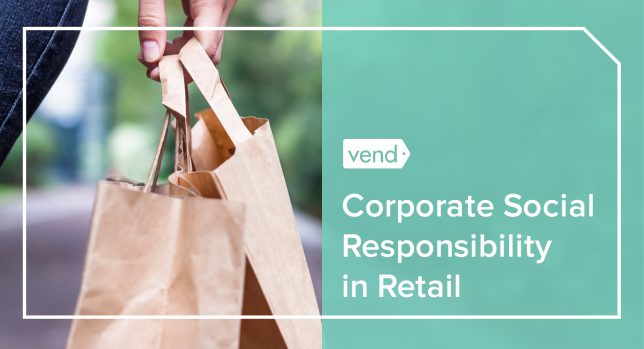 Corporate social responsibility (CSR) is becoming an increasingly popular concept in the retail world. More and more merchants are realizing that giving back doesn’t just make the world a better place, it’s also good for business.

Research has shown that 87% of customers consider CSR in their purchase decisions, and that “given similar price and quality, consumers [91%] are likely to switch brands to one that is associated with a good cause.”

Clearly, engaging in corporate social responsibility can earn you extra points (and sales) from customers. That’s why if don’t have any CSR initiatives in place, you may want to cook up ways in which you can align your business with ethical practices and good causes.

Here are a few ideas to help you do this:

If you create or design your own merchandise, consider creating specific lines or products specifically for charity. That’s what Francesca, a jewelry retailer does, and it’s working out beautifully for them. According to their website, their business has raised over $87,000 to charity so far.

Here’s how it works. Francesca has a number of jewelry pieces that were designed with specific charitable organizations in mind. For example, they have the Be Hers Medallion which was released in support of 2018 Be Her Freedom events. There’s also the Awareness Bracelet, which was created for the National Breast Cancer Foundation.

Proceeds from sales of these pieces go directly their charity partners.

2. Create or participate in events that promote giving

Every year, there’s an event called Giving Tuesday which is celebrated on the Tuesday following American Thanksgiving (this year it falls on November 27). This day is all about giving back. Businesses and consumers participate in charitable initiatives, and the movement is largely fueled by social media with the hashtag #GivingTuesday.

Over the past few years, retailers have increasingly participated. There’s Petco, which donated pet toys to a number of animal shelters.

Meanwhile, Draper James’, the clothing line owned by Reese Witherspoon, donated 100% of the proceeds from their #DJSisterhood collection to Girls Inc for Giving Tuesday.

Now, you don’t have to wait for Giving Tuesday to come along in order to do something charitable. Most causes have dedicated awareness days or even months. October is Breast Cancer Awareness Month, while April is National Parkinson’s Awareness Month. Find the best time of year to raise awareness or funds for your cause, then launch a retail event for it.

3. Be conscious of how your products are sourced or manufactured

While trying to lower production costs is just good business, don’t do it at the expenses of laborers or the environment. More and more consumers are starting to care about how products are sourced or manufactured. In fact, a lot of them would be willing to pay more for merchandise produced responsibly.

As we cited in our post about competing with fast fashion, “an informal study of 390 consumers found that ‘over 75% of respondents agreed that they would be willing to pay more for clothing produced using responsible labor practices.’ Similarly, a YouGov poll found that 74% of shoppers ‘would be happy to pay an extra 5% for their clothes if there was a guarantee that workers were being paid fairly and working in safe conditions.’” Have a look at what Everlane is doing. The apparel retailer spends months finding the best factories and ensuring that they’re in line with the company’s values. “We visit them often, and build strong personal relationships with the owners,” says Everlane on its website. “This hands-on approach is the most effective way to ensure a factory’s integrity. As an added assurance we also require stringent workplace compliancy paperwork.”

There are likely plenty of CSR opportunities right in your backyard. Do some research on what’s going on in your community and see if there are any charitable initiatives or events that you could support.

Is a local non-profit org hosting an event? Are members of your community raising money for a new recreation center? Do what you can to support these efforts. You could, for example, sponsor that local event or donate a portion of your revenues towards the fundraising effort. Doing so will not only enrich your neighborhood, but it could also boost your image in the community.

One of the most common ways to engage in CSR is to support a charitable organization. Look for a group that supports a cause you believe in, get in touch, and strategize on how you can support them. You can, for example, donate a portion of your revenues to that charity. That’s what the GAP is doing in its Give Twice initiative. For every gift card sold, the retailer donates 2% of the purchase to organizations such as CARE or Communities in Schools. Other retailers are opting to donate products. Take medical apparel retailer FIGS, for example. The company has a program called Threads for Threads where it donates a set of scrubs to a healthcare provider in need, for every set of scrubs sold on its website.

There are also businesses that decide to set up their own foundations. Companies such as Starbucks and Chipotle have taken charitable giving into their own hands by creating organizations under their own brands. Of course, this route may be a bit more complicated, so for a lot of SMBs, it might make more sense to partner up with existing organizations.

6. Invest in your workforce

CSR isn’t just about external initiatives. The concept of giving can also be applied to your employees. Remember that it pays to treat and compensate employees well. Studies have shown that retailers who invest in their workforce not only have more motivated employees who provide better customer service, they also tend to be more profitable.

In a New Yorker.com piece about retail staffing, James Surowiecki cites a Wharton School study that found that “every dollar in additional payroll led to somewhere between four and twenty-eight dollars in new sales.”

One retailer that exemplifies this is Costco, which has reaped the benefits of paying and treating employees well.

As TriplePundit’s Leon Kaye put it:

While most big box retailers insist on paying low wages with the claim that thin margins require reduced labor costs, Costco for years has been breaking the mold. Wall Street squawks that the membership warehouse giant should push for higher profit margins and reduced labor costs, meanwhile the company, led by its iconoclastic founder and former CEO, Jim Sinegal, constantly flicks his chin at The Street and its yammering analysts. The results: happy employees, enviable stock performance and a brilliant shopping model that, let’s face it, bludgeons consumers into shopping happily for more.

Speaking of your workforce, a growing number of companies are engaging in CSR through more diverse hiring practices.

For instance, back in 2007, when Walgreen’s established a distribution center in South Carolina, the company set a goal to fill 30% of the 800 jobs with individuals who had intellectual and developmental disabilities. It was a wonderful effort that proved to be incredibly successful.

According to the Huffington Post, “By adapting the on-site training program to suit disabled job-seekers and by working closely with local agencies for people with disabilities, Walgreens was able to hire beyond its 30 percent target. What’s more, the company found that the center operated 20 percent more efficiently compared to others in its fleet, citing increased productivity, lower turnover and a highly motivated workforce.”

There’s also Johnson & Johnson, which shows a commitment in hiring more women by incentivizing their top managers to hire more female employees. Forbes reports that “Since 2015, Johnson & Johnson’s top managers have a portion of their bonuses tied to meeting certain diversity metrics, including how many women they hired in the previous year.”

Already engaging in CSR? Here are tips to boost awareness (and sales)

If you already have CSR efforts in place, here are a couple of tips to help spread the word:

Include it in your packaging

Be sure to talk about your initiatives in your packaging. If revenues for a particular item would go to charity, see to it that this fact is mentioned in your packing. Doing so not only spreads awareness, but it also encourages shoppers to buy the product.

In a survey by Nielsen about CSR, they found that about 52% of global respondents “say their purchase decisions are partly dependent on the packaging – they check the labeling first before buying to ensure the brand is committed to positive social and environmental impact.”

When you launch your CSR efforts, market it like you would for an event or a promotion. Mention your initiatives to customers, put up in-store decals, posters, or signage, talk about them in your newsletter, and dedicate a few social media updates to your cause. If you have a website, create a dedicated page for it as well.

Celebrate the success of your initiatives

Once your CSR program has gained traction, be sure to celebrate its success. Customers love to hear that their money is being put to great use, so update them on all the good that you’ve accomplished.

Document the results of your efforts (i.e. money you raised, number of people that you’ve helped, etc.) then spread the word through your site, employees, newsletter, and social media accounts. It’s always great to communicate good news and this move could also encourage customers to buy from you and support your cause even more.

Do you have any CSR initiatives in place? Let us know in the comments.